In September of 2010, Chris Rosebrough attended an Emergent Church conference called Christianity 21 put on by Doug Pagitt and Tony Jones to do primary source research . As a vocal critic of the movement and having specifically called out and condemned the aberrant theology of several of the speakers, the fact that he was there caused no small uproar. Several people wanted him gone from the conference, specifically Jay Bakker. In an attempt to calm things down, Tony Jones suggested they take a breather and go outside and take a picture with Chris in front of his PT Cruiser, along with Nadia Bolz Webber. 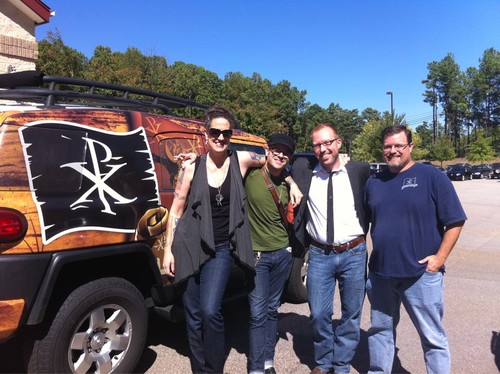 What happened shortly thereafter is that Tony Jones, tweeted out the picture with the following caption: 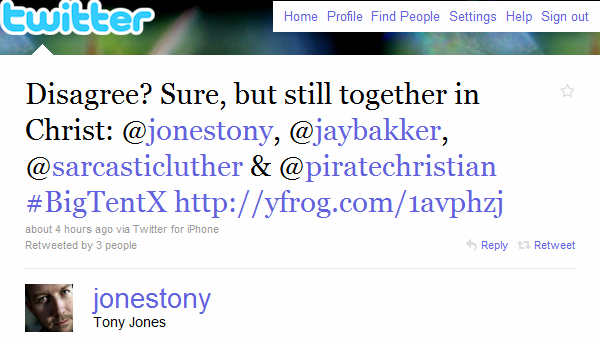 Some took this to be a form of betrayal. “Together in Christ!? With these people?!!”Three of the people featured were gay-affirming progressive heretics and Chris received a great deal of criticism for this picture, the vast majority of it unjust and unfair. Afterwards, in an episode of Fighting for the Faith, Chris Rosebrough set the record straight and lamented that he took the picture in the first place, particularly because of the way it was twisted and made to seem like he supported these people, when he did not. He expressed deep regret for it, for the way it looked and for the confusion that it caused as a narrative that would confuse his listeners. He made it very clear that did not agree with these three and rather regarded them as unbelievers and lost.

As the Christian conference “Liberate 2015″  closes out and wraps up, Daniel Emery Price, one of the attendees, posted this picture to his Twitter feed yesterday. 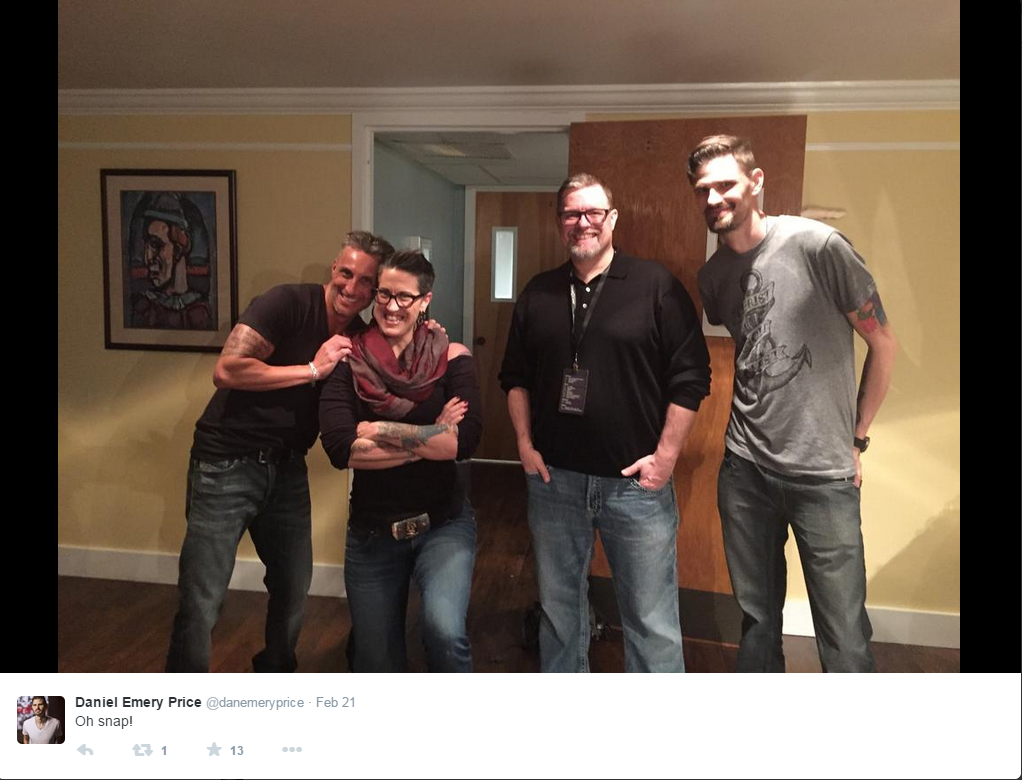 The picture is notable for one reason – it again features Chris Rosebrough with his friend Pastrix Nadia Bolz Webber, who instead of having repented and moved towards Christ and biblical fidelity, has instead sunk deeper into apostasy and has continued a trajectory of destruction and wolfishness. It also brought to mind the picture that Tullian Tchividjian had taken of himself with Nadia a few months ago back in November, which likewise has left people confused and asking some legitimate questions, particularly:

Should we take pictures with heretics when it could be construed as support?

Should we be friends with them and invite them into our homes?

Does friendship and pictures with necessitate a promotion of them and tacit endorsement?

Should we instead rebuke them sharply so that they might be silenced?

This isn’t a topic that is discussed much. I would love to see a Christian conference on this, something like “Handling the Heretics” that examines how we ought to respond from a Biblical perspective to all manner of situations revolving around this theme [including what to do when solid, faithful speakers attend conferences with really bad teachers]. But as a result, because there hasn’t been much dialogue and teaching, several people have become concerned and confused by this, much like the way they had back in 2010. Chris had indicated regret that he had posed with these people, and yet history is repeating itself once more. Recently, this picture popped up on Chris’ wall, which immediately sparked discussion. 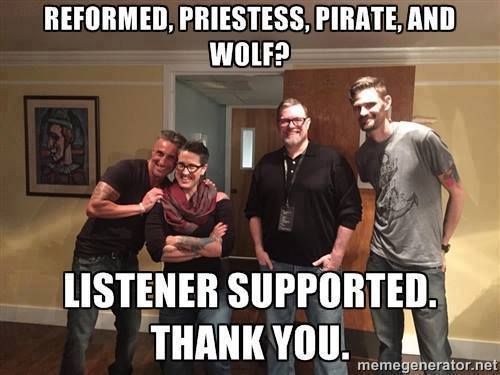 In this case, I find the aforementioned image needlessly provocative and in poor taste, functionally serving as a snarky questioning of Chris Rosebrough’s character and integrity, even as Chris is on the record as rebuking and speaking out against her and her beliefs HERE.

I love Chris Rosebrough and have the utmost respect for him. I have listened to every episode of Fighting for the Faith on podcast [and you should too] and have financially supported his ministry for years, [and you should too]. He is as solid a discerner as they come, and even though I’m not Lutheran, his faithfulness and biblical work he does strikes the right balance every time, and he is an invaluable treasure to the Church body who has labored and proven himself for years. I’ll lay my cards on the table – I have nothing but unashamed love for this man. His work has blessed tremendously and I will defend him against all attacks and aspersions. I do not ask these questions to criticize or question that, but rather because I want my brothers and sisters to work through this with me. I want us to ask ourselves, “What does taking a picture signify, if anything, and how should we respond?”  This recent brouhaha just so happens to provide a great opportunity to do so.

It’s important to always assume good intentions on behalf of our Christian brothers – to love them well by looking at all their actions in the best possible light. We can disagree on these situations and how they ought to be handled, but that abundance of grace ought to always be at the forefront of our minds. Personally, I would not have taken a picture with any open heretic or false teacher. I’m not saying it is sinful or wrong, but rather I think it causes confusion and, much like what happened back in 2010, can easily be used to promote an agenda or be taken out of context for mischievous purposes. It also tends to create a welcoming and inviting environment for false teachers, where they can feel comfortable and rest without fear that they will be rebuked and called out.

What I would have done [and we can likewise debate the merits of this] is that once I saw that she was attending, I would have waited until everyone was seated, and then once everyone was quiet and in attendance, say, “Before we begin, It’s important that the purity of the gospel be unsullied, proclaimed and protected. For this reason we invoke Romans 16:17-18: “Now I urge you, brethren, note those who cause divisions and offenses, contrary to the doctrine which you learned, and avoid them. For those who are such do not serve our Lord Jesus Christ, but their own belly, and by smooth words and flattering speech deceive the hearts of the simple.” Nadia Bolz Webber – you in the third row, two seats down – you are a false teacher who defames and defies the word of God. You are an unrepentant wolf among the sheep. You are not a Christian and we will not tolerate your heresy and perversions.  Leave this building or you will be escorted out.” And then I would have filmed the whole thing and disseminated it online with a blog post documenting and chronicling the vast swath of evidence against her which proves my claims.

Is that the right choice? Perhaps? Should we rebuke at every chance we get? Is taking a picture with a false teacher wise and advisable? Is it harmless and loving? Is it confusing? Is it a non-issue or does it tacitly promote? Is the friendship itself problematic? Is the very question itself nitpicky and needless parsing?

Please let us know what you think. Comments will be open for 24 hours, so feel free to interact, but any comments suggesting that Chris approves and agrees with this woman’s teachings or cast aspersions on his character will be heavily moderated and deleted.

Homosexual “Christianity” – What is Happening?