Twenty-one Egyptians who were being held by Islamic extremists were executed yesterday. They were decapitated. They were killed because they were not Muslims and because that’s what the extremists do…they kill people, savagely, brutally, horribly, sinfully.

Southern Baptist and evangelical leaders were stumbling over themselves yesterday in a race to demonstrate who was the most sympathetic to our fellow Christians and these brave martyrs for the faith. 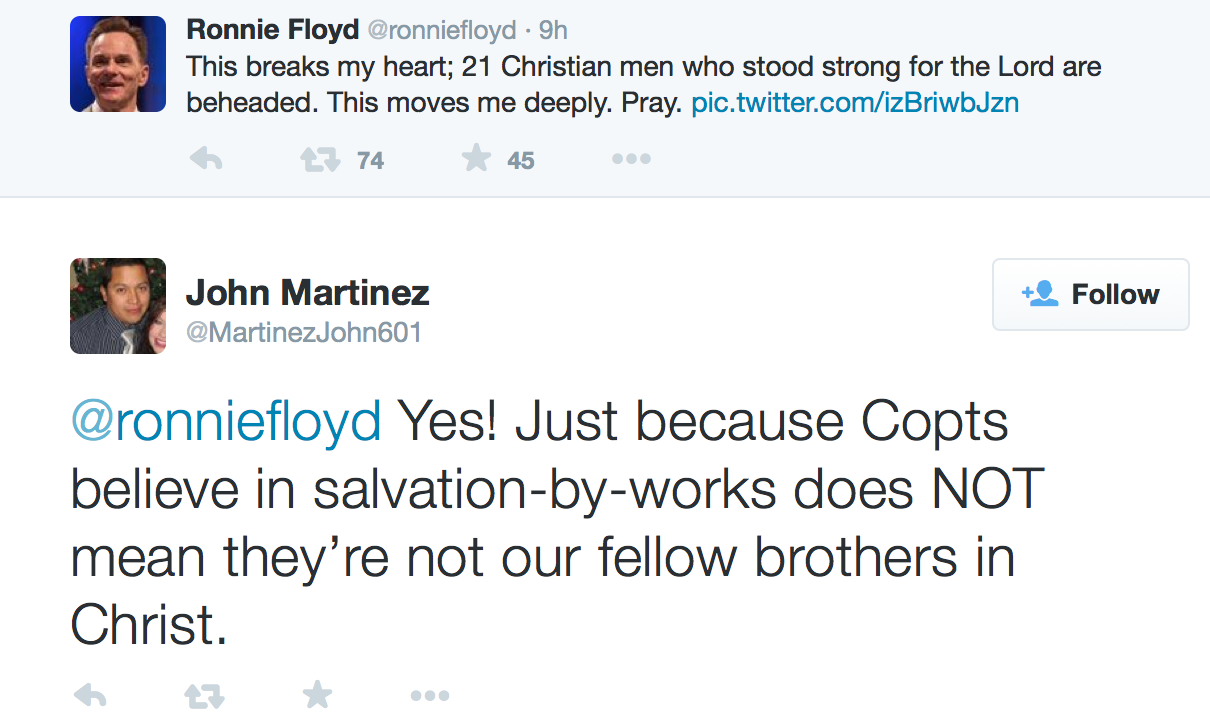 Do Southern Baptist leaders and other evangelicals really not know what a Christian is or how you become one? Is it being born into an ethnic group that denies the dual-nature of Christ in his full deity and humanity? Is it embracing a meritorious, works-based salvation nearly identical to that of the Roman Catholic church? Is it in aggressively denying salvation by a personal, saving relationship with Jesus Christ? We ask because that’s what Coptic ‘Christians’ believe. This really isn’t new, and we have to wonder why our leaders don’t know what Coptics believe and if they do, what on Earth makes them think they should be categorized as Christians.

Now, sure. In the broadest possible (and most inaccurate) sense possible, the term Christian is applied to the Coptics for the same reason it is applied to Roman Catholics by major media. To secularists, all one has to be to be considered Christian is to call themselves one. In this same sense, the press refers to cultists like the LDS and Jehovah’s Witnesses as Christians as well. There should be no outrage that the press calls them such, or even their outrage representative to evangelicals, Todd Starnes. We get it; they don’t get it. But why again do our Southern Baptist leaders not grasp that?

Maybe it’s one of those “Today we are all Republicans” type things – the expression used by Ronald Reagan’s surgeon the day he was shot – and often used to express solidarity to those suffering. A few weeks ago we are all Charlie Hebdo. So maybe what they mean is, “Today, we are all Coptics.” I think we’re fine with that, in a way. But that’s a far cry from saying, “Today, Coptics are Christians.”

Now is not the time to discuss doctrinal differences! We can hear that echoed now. How dare you, in a time of tragedy!

Frankly, now is not the time to confuse for the entire blooming world what it means to be a Christian. We cannot consider the Coptics an unreached people group by the IMB one day and then call them Christian martyrs the next. Why anyone should have to point this out to our SBC president is beyond me.

What’s at stake, you see, is the Gospel. May God forbid our (good and honorable) desire to show sympathy for temporal suffering lead us to say careless words that might lead to eternal suffering. The Coptics, by their confession, believe in salvation-by-works. They need to be evangelized, and they need to come to Christ.

Please love the group known as ‘Coptic Christians.’ Please pray for them.

This post has received negative feedback from a number of blogs. Here are our thoughts.

Most criticism has come from one of three directions. From the first direction, a certain segment of high-church sacramentalists who also would criticize us for believing that Roman Catholics are not – if they hold to their confessions – Christian. There’s little we can do about that criticism. We do not believe that baptized equals saved. Like most Protestants still holding to our confessions, we recognize those whose confessions negate a grace-alone, faith-alone, Christ-alone salvation as unbelievers. And so…here, we stand.

There has also come criticism from mainstream evangelicalism that doesn’t really have a confession at all. Like the aforementioned group, these believe that having the name Christian suffices. We believe one must be born again and have a faith in nothing less than Jesus’ blood and his righteousness to be saved. The Coptic Christian confession and church tradition (that, like the RCC, sees as a higher authority than the Bible) denies this. Is one saved by orthodox doctrine, one critic asked? One is saved by faith alone in Christ, but one cannot be saved without an orthodox understanding of what that means. This is nothing controversial in the realm of Christian orthodoxy, although it may not be well received in the midst of emotional hysteria. Likewise, some have said “How do you know for sure none of these men were born again?” Clearly, we do not know that, just as it would an absurd assumption that these martyrs were born-again believers. We can only assume that they hold to their confession, of which there is good reason to believe the negative – that they held to the theological convictions of their “church.” Likewise, there may be (hypothetically) a professed Mormon or Muslim or Catholic somewhere who doesn’t hold to the doctrines of their faith, who do not take part in false worship, and who somehow maintains a belief in Jesus. But it would not be irrational to assume people hold to their confession. It would be irrational, however, to assume for some inexplicable reason all of the 21 had forsook their confession and we are to consider them Christians. Neither have we said they weren’t martyrs. Indeed, they were. And there are Muslim martyrs, Buddhist martyrs, and Hindu martyrs. It may be an Islamic belief that to die a martyr makes one a true believer and assures a place in paradise, but such is not a Christian belief.

Finally, there are some who’ve said the timing was “bad form.” They would say the same of Jesus, no doubt, who Luke 13:1-5 who upon hearing the news of a massacre in the temple, chose to make the message, “Repent, or else ye, likewise, will perish.” As stated in the article very, very clearly, we must not assume these men are believers to call this act terrible and sinful, and to weep with their families or be drawn to prayer for them.

What is of chief concern is that – as stated in the article above – the Southern Baptist Convention’s International Mission Board recognized the so-called Coptic Christians as being in need of evangelism and part of a false religion. Upon martyrdom, our leaders have now assumed those who they previously characterized as a “lost people group” are now, somehow, Christians – those who just a few days before they were seeking to evangelize.

In October of 2012, the Billy Graham Evangelistic Association received much publicity for removing the Mormon Church from their list of cults on the BGEA website as Romney was running for president. Many conservative Christians – and no shortage of Southern Baptists – were enraged at this. It was, quite evidently, a capitulation of political expediency. Todd Starnes and others who make a living highlighting Christian persecution are out in force on this topic. Christian radio is in an uproar. The blogosphere is up in arms. And they all should be. Murdering people for their faith is sinful, regardless of their religion. As we outlined above, Southern Baptist leaders are on the (very worthwhile) soapbox.

What is not cool is that in the last few days, the SBC’s International Mission Board has scrubbed all articles relating to Coptic Christians and their status of being unreached, lost, or in need of evangelism. This is a screenshot from just a few days ago. 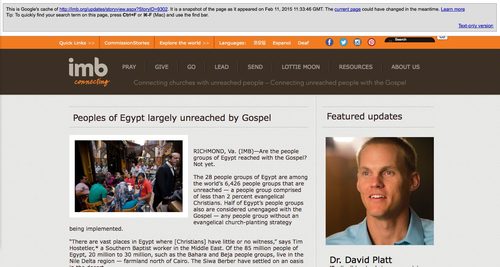 Today, the article has been scrubbed. Oh, and every single one like it, referencing the Coptic Christians as non-Christians.

To be as generous as possible, we can presume this was to protect missionaries in the heat of crisis, even with the peculiar timing. In the mean time, the point made in the article above is still valid… We cannot assume they are lost one day, and upon news of a tragedy, change our perspective on their need for the Gospel. Well-deserved and heartfelt sympathy or desire for solidarity does not change the Gospel that is by faith alone.

Iowa Senate Passes Bill: Life Sentence, No Parole for Murder of Unborn Without Consent of Mother

Will Alex Malarkey get shouted down by Floyd at the SBC?