/2016/02/05/beth-moore-predicts-god-will-unite-all-sectors-of-christendom/Beth Moore recently wrote a post at her Living Proof Ministries, apparently fed up and perhaps feeling the heat of being criticized. The precipitating event, according to Moore, was the criticism received from a 22 year-old woman [who happens to be a pastor’s wife and member of #the15] who called her a false teacher. In the post, Moore laments the woman’s charge and equates witch-hunting to heretic-hunting. Of course, it’s been a few years since anyone has burned a heretic at the stake, and I’m not sure anyone is calling for that. Nonetheless, it seems that Moore views the situation as very serious. In the post, Moore seems genuinely befuddled as to why she would be called a false teacher, let alone by a young woman – obviously, Moore’s key demographic.

By way of quick clarification, and to be fair and precise, while the “false teacher” claim gets thrown around a lot with seeming ease and abandon, we ought to consider whether Beth Moore would fall under this title, strictly speaking. Does she teach false things, even dangerous things? She does. But probably one of the most helpful articles that I’ve read was by Lyndon Unger here at Part 1 and especially Part 2 . In these posts he offers wisdom and clarity into how the terms “false teacher” and “false prophet” ought to be used in a biblical sense and who we should affix them to. Extremely edifying, and I would encourage everyone to read those two before proceeding. Beth Moore needs to be corrected for what we lay out here, but she also needs to be treated fairly. There is much I will criticize her for, but also much from which she ought to be defended from.

Not only that, but Moore’s post clearly questions whether a woman that young could have come to these conclusions herself or if, perhaps, she’s been misled by someone. What followed were comments from Moore’s fan-base offering her positive reinforcement and further lamenting that any young woman, anywhere, might make such accusations.

Well, through providential circumstances, the young woman reached out to Moore after seeing herself the object of Moore’s post [and newly blocked by her on Twitter] and Moore [much to her credit] sent an email to the young woman, Jessica. The following exchange has been provided for you, and it’s urged that you carefully read each one.

The first thing that stands out is that Moore appears to be genuinely confused as to why she would be called a woman who teaches falsely. What’s not surprising is that the VP for Communication at the ERLC would feign confusion as to why people might give Moore “grief.” One can hardly believe that Darling is actually bewildered as to the charges against Moore on account of her wild claims of direct, divine revelation, ecumenism and fast-and-loose Bible interpretation. seen HERE HERE HERE As Moore reveals prophecy on the set of TBN, Darling may not agree with the criticism, but surely he understands it. 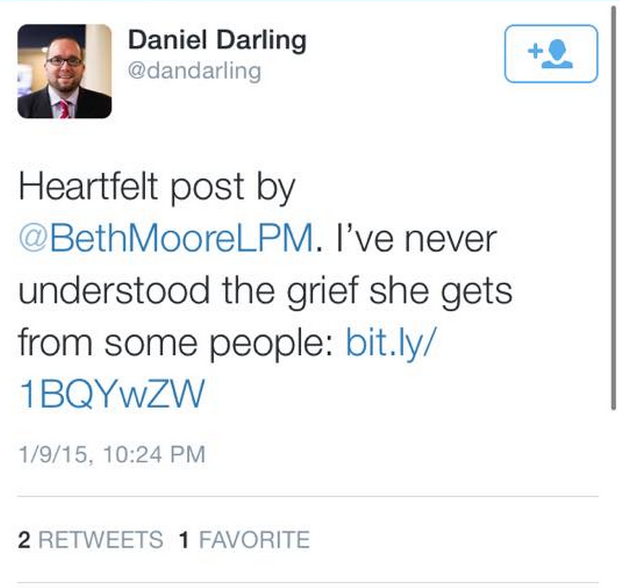 But Moore’s confusion at least seems real. And the emails above seem to demonstrate that. Moore says that Jessica’s criticism is not only painful, but “bewildering.” It’s difficult to ascertain precisely how much of the vast volume of criticism toward her – particularly in relation to her prophecy claims – Moore is aware of. Her critics’ volume of work, like Chris Rosebrough’s now-famous Mystichicks presentation at the 2014 Reformation Montana Conference or Justin Peters on Worldview Weekend could hardly be more articulate. If she is as bewildered as she claims she is, then why not take the time and talk to some of her most well-studied critics who have demonstrated that they can discuss her in a fair and kind way?

These men have reached out to her multiple times in whatever way they were able to and yet she has not respond to them or acknowledged them, choosing instead to reach out to a young woman. [Who handled herself graciously and masterfully]

Notice also that Beth Moore did not respond to the last email when pressed to give specifics or name names or help teach her at this point in what has been from my impression a cordial discussion But that was the end of it. No final goodbyes but rather an abrupt dismissal. Surely when she looks at the great swath of people claiming to be Christians and yet speaking heretical things,  this would be an easy task for her as a Christian leader. It also would have been nice if she could have responded to a video like this and walk her through what was going on, from her perspective.

Moore’s email to Jessica seems to have a tone of condescension, particularly regarding her age. What transpired in the exchange between the veteran “Bible teacher” and the 22 year-old pastor’s wife is very telling.

What’s really new in this exchange however, that the evangelical world really needs to know about, is that Moore confirms that she receives what she calls “special revelation.” While acknowledging that she receives special revelation [while denying hearing an audible voice – in spite of the assortment of videos in which she says that she’s heard God’s voice], Moore says that she doesn’t hold her dreams, visions or message as highly as the Bible. That’s good to know.

And yet there seems to be no understanding from Moore as to why you wouldn’t hold a special revelation from God as authoritative as the Biblical canon. That distinction simply doesn’t hold water. God doesn’t speak authoritatively in the 66 books of the Bible and only kinda authoritatively in visions and dreams to Beth Moore. When God speaks he speaks absolute truth. Period.

Again, we have a reason to doubt that Moore has fully thought out that reality, as she uses 1 Thessalonians 5:20 in defense of prophecy. Clearly, Beth Moore believes that she’s receiving prophecy – it’s just not as authoritative prophecy as what is in the Bible.

Of all the amazing things this exchange reveals, it’s clear and in Moore’s own words that she considers herself a prophet who receives non-audible dreams, visions, and words from God. It’s also pretty clear that Moore doesn’t quite understand why that’s such a big deal.

Jessica and her husband, Briar, released this statement as well and we feel it’s a fitting way to end the post:

We would personally like to Thank CARM for their ministry, and all of the biblical critique and honest evaluations they have left for the church to discern. A special thank you to everyone who has supported us, especially all of the brothers and sisters we have connected with as of late through #the15. Thanks to JD Hall for connecting us with Justin, and thank you Justin Peters for taking the time out of your saturday night to speak with us, and offer your own biblical discernment.

Our only hope is that this conversation will reveal the true nature of these teachers we have raised up in the Western “Church.” They are often seen as nice people, sharing kind words; but do not be deceived by their flattery (Romans 16:18!), if they do not come to you bearing the true gospel, they are an enemy of the cross (Gal 1:8). My friends, have nothing to do with these people. As you walk in love, you are called to expose them (Eph 5:8-12).

Please Pray for Beth, that the Holy Spirit would convict her for having no answer to give us. Pray for her followers, that they would be forced to ask themselves what falsehood looks like, and weigh what a counterfeit gospel really is next to the word of God. Also, pray for us. We have never had a need for the spotlight, and would like to ask each and everyone of our dear friends in the faith to uphold us to the Word as we spur one another toward Christ. May we all continue onward towards the character of Christ.

Also note. Beth Moore, if you are reading this and would like to be put into contact with some faithful men who have done honest and fair research into your teaching, please follow me on Twitter @paperhymn and then message me. Not that Jessica and Briar haven’t done a sincere and stellar job, because they have, but because there are people out there who have been listening to your teaching and sermons and sessions and books and seminars for YEARS, and who have consumed and digested and worked through the vast majority of your work for years, and who might also be equipped to delve into some other specifics and problems that were not touched upon in this short encounter.

Nancy Pelosi: ”Any Kind of Earthly Good is a Holy Act”