Michael Gerson, an op-ed columnist for the Washington Post and former speech-writer for President George W Bush is credited with coining the phrase, “The soft bigotry of low expectations.” Gerson, who also is a member of the “evangelical intelligentsia” – an elitist group of evangelical Christians who excel in various fields of academia – designed the phrase to articulate a widely-understood but rarely asserted reality; racism is not always overt, but rather is often displayed in a politically-correct, yet patronizing acceptance of bad behavior or lowered standards.

As Ferguson erupts in riotous violence, America’s leading evangelicals – like Southern Baptists Russell Moore and Ed Stetzer – are falling over themselves to prove who is the most thoughtful, compassionate, and sympathetic to the racial tension and tragedy that the community has come to typify. In their race to win the racial sensitivity award, what they’re demonstrating is the soft bigotry of low expectations.

A twelve-member grand jury – after looking at all relevant evidence, some of which has yet to made available to the public – chose not to indict officer Darren Wilson for using lethal force after being assaulted by Michael Brown. It seems that the jury determined what most reasonable people have known for some time; an officer with an exemplary record and quality personal character was in fear that his life was in jeopardy from someone who, by all reasonable accounts, has a lengthy criminal record and troubled personal character, and the officer exercised necessary force to eliminate that threat.

A mob has become predictably upset over the ruling, after being predictably upset before the ruling, after being predictably upset after the incident. In general, this mob has been upset since the August 9 confrontation. This is not a hurting community (albeit a hurting community no doubt exists in Ferguson). The mob, simply put, is not a community at all. Communities are built around shared values. This group, it seems, is built around a lack of values and the intended desire of watching the world burn. Adding an equally predictable and obligatory qualification, this mob of questionably-sincere outrage-professionals should not taint our perception of the entire Ferguson community, which is no doubt filled with hard-working, tax-paying responsible citizens of a myriad of colors and ethnicities who are embarrassed at the attention the mob is bringing upon their community.

This particular segment of the population in Ferguson and the surrounding areas, within just a few hours of the grand jury’s findings, has fired rounds, thrown molotov cocktails, assaulted fellow (white) protesters and burned police cars. By the time most read this post on the morning of November 25th, this list will no doubt be longer.

Much attention has been given to the “black churches” of the Ferguson area who have done little but fan the flames of bad behavior, whether lending the pulpit to Communist community organizers raising an army of anarchy or offering their facilities as “sanctuaries” for rioters. More attention needs to be given to leading American evangelicals, however, who are doing anything but making the situation better by their misplaced sympathy and pandering, patronizing betrayals of their own innate soft bigotry.

We break in heartache for black evangelicals like Thabiti Anyabwile, who apparently feel torn in many ways.

Anyabwile has made headlines in the last few months for making repeated overtures in support of the outraged mob, and little to none for the officer and his family or the citizens of Ferguson who suffer the collateral damage in this war of contrition upon law and order. Tonight, while his sentimentality is certainly not out of place,  it seems that again Anyabwile’s thoughts of sympathy are one-directional.

What’s perhaps less understandable are white evangelical leaders likewise being utterly calloused toward the victim in this sad exchange, the officer who has lost his career and reputation because he was ruthlessly attacked by a criminal. As Doug Wilson recently wrote, being nice really is the besetting sin of American evangelicalism. We want the secular press to feign over our thoughtfulness and open-mindedness. Being characterized as racist or bigoted – even in veiled innuendo – is to be avoided at all costs. We want Christianity Today to give us a congratulatory back-slap as we distance ourselves from the real and actual bigotry of our institutional past. We want to distance ourselves as far as possible from Richard Land’s insensitive remarks regarding Trayvon Martin. We want to be in the Evangelical Intelligentsia, and frankly, you don’t get invited to that club if you’re seen as insensitive or too loose-lipped with obvious (but inconvenient) truths. 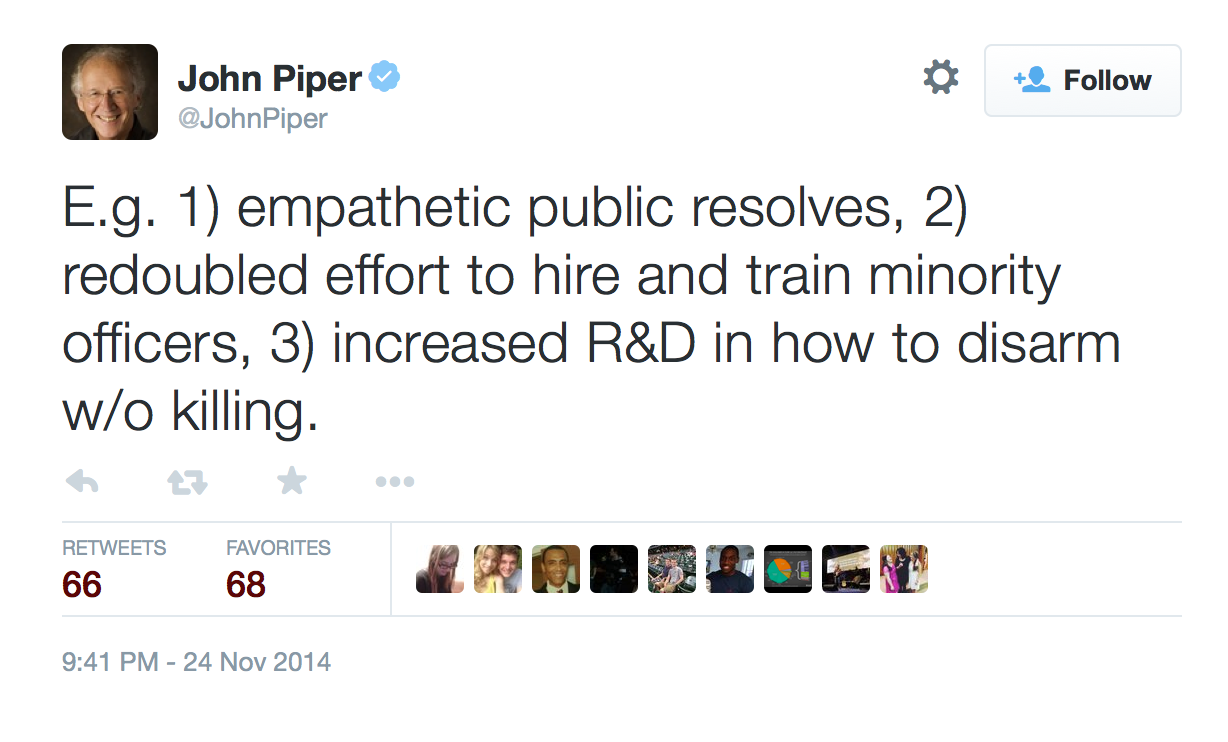 John Piper used his vast social media platform to argue for empathy (for who, the criminal antagonist?), affirmative action and a fairy-tale program that will do little more than put officer’s lives in jeopardy (frankly, I don’t want law enforcement turning to theologians for advice regarding their own personal defense). Piper calls for what seems tantamount to sensitivity training.

But shouldn’t it surprise us that Russell Moore, President of the SBC’s Ethics and Religious Liberty Commision (ERLC) – gave Obama’s speech a glowing review? 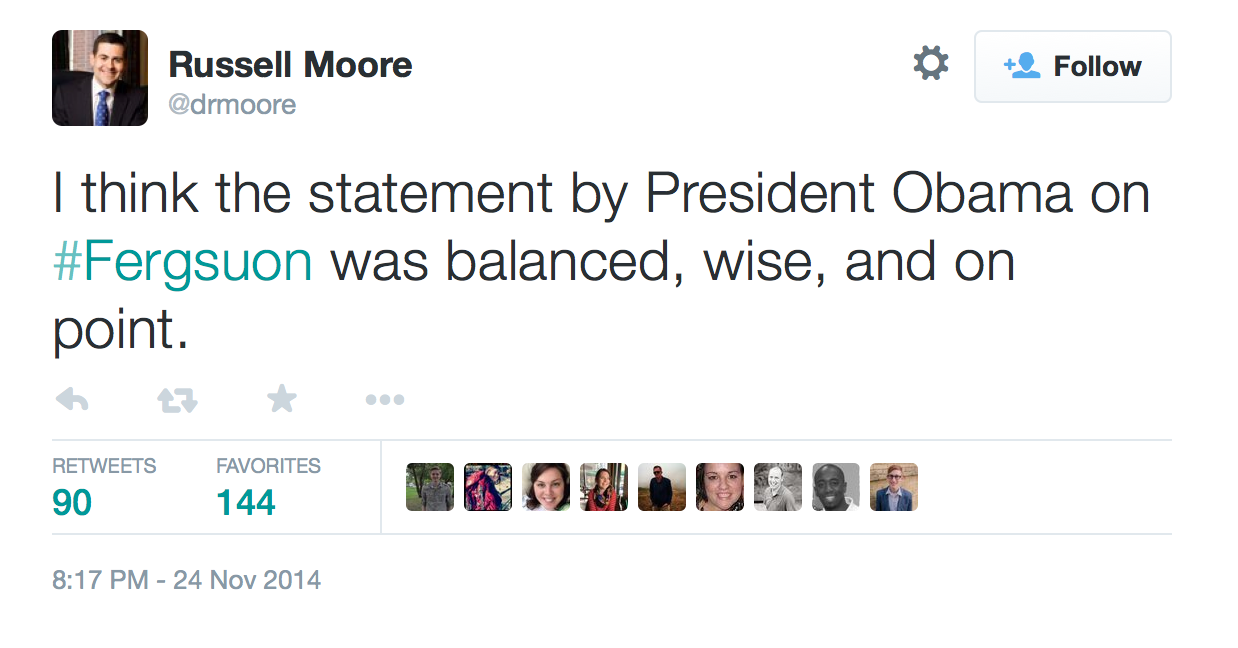 And then, there’s Ed Stetzer’s epic display of white evangelical guilt in Christianity Today. Within the first sentence, Stetzer points his deriding finger to white evangelicals and admonishes us to “talk a little less and listen a little more.”

We shouldn’t be saying that the mob shouldn’t be upset, and we should rather figure out why they’re upset, Stetzer argues. In truth, it sounds reminiscent of certain Ivy League professors in the days following 9-11, telling us our first priority was to figure out why the terrorists hated us so much (and that we probably had it coming, anyway). And even though Stetzer admits he doesn’t have the evidence the grand jury was privy to, he then says that “we must acknowledge that injustice really exists.”

Well, of course injustice really exists. Injustice exists in a million different ways. But given that Stetzer doesn’t know why the grand jury would find this officer innocent (apparently he doesn’t watch the same news the rest of us do), why would he argue that this event in particular must cause us to reflect upon injustice?

Stetzer’s article feeds into the very frenzy that has overtaken Ferguson, repeating the question, “Will white people ever acknowledge injustice exists?” The answer, for Stetzer, is that we (white evangelicals) confess our sins, repent and seek reconciliation with those we hurt.

You’ll never hear or read the Pulpit & Pen contributors complain about a call for repentance or a confession of sin. Praise God, indeed. But why, I would ask, are evangelicals like Stetzer using this opportunity to call white evangelicals to repentance? Sure, we need it. All we need to prove our need for repentance is to look at what the shelves are stocked with at Stetzer’s Lifeway. But why are riots in the street of Ferguson a call for us to repent?

Here’s the truth; a mob is rioting in Ferguson who are not being called to repentance by the churches they attend. They’re not being portrayed as the law-and-order-hating sub-citizens that they really are, by the media. They’re not being called terrible examples for the children they haven’t aborted by the community organizers. They’re not being called down by the President as being antithetical to a nation based upon laws and a legal system that – whether they like it or not, worked. No, the mob is being coddled by nearly everyone, including America’s leading evangelicals. The message they’re receiving is that the worse their behavior, the more we will consider their long list of demands and grievances.

And no doubt, there are grievances. No doubt, there are innocent men and women profiled for the color of their skin and treated as guilty until a background check can be run. No doubt, there are financial challenges for children of that community that leave someone working harder to get ahead. And on occasion, there are real miscarriages of justice. Even more than that, there’s the systematic attempt by one political ideology to enslave a permanent underclass through government entitlement in order to solidify a voting block. There are definitely real, tangible grievances.

How incredibly unproductive is it to consider these grievances while the mob is rioting? How foolish is it to use bad behavior as the precipitating reason to discuss their plight (real or imagined)? I don’t let my children get their way when they’re throwing a tantrum, lest I get more and more tantrums. Our culture seems determined to reward bad behavior. It seems that America’s leading evangelicals are capitalizing on that societal trend in yet another failed attempt at cultural relevance and secular pats on the back.

The evangelical message needs to be, “We understand you have grievances. We understand you feel you’ve been wronged. Let’s discuss that, but first go home, tuck your kids in, and go to bed early so you can get up in the morning and be a productive citizen. Then, let’s talk.”

More importantly than that, we can stop exalting the culture of victimization, because a conviction for sin is hard to find when even the religious authorities make excuses for your sin and insist on pointing their finger elsewhere.

Nominees: The Worst Christian of 2021

On The Gospel Coalition’s “Wretched Infatuation” With Culture