A heart-breaking news story from Oregon has been floating around social media. A beautiful young woman, only 29, has announced plans to commit self-murder, November 1.

Brittany Maynard has been diagnosed with Grade II Astrocytoma. First predicting she would live ten years, doctors then downgraded their optimism and gave the young woman a six month expiration date. Being told that her death would be slow and painful, she’s decided to murder herself two days after her husband’s birthday. And how is Maynard spending her last days? Being with her husband? Enjoying long walks on the beach? She’s teamed up with “Compassion and Choices” to advocate for the right of self-murder. It seems that Maynard’s make-a-wish was fame, and she’s receiving it at the expense of her own life. Quickly becoming a celebrity of the pro-death culture, her fame will be short-lived.

Our culture of death applauds Maynard for the taking of her life. This is reminiscent of the news stories that are not altogether uncommon, of bystanders yelling “jump” to suicidal men or women on the precipice of tall buildings and bridges. Although the latter forms of encouragement are generally condemned by the culture, the former forms of encouragement are accepted. 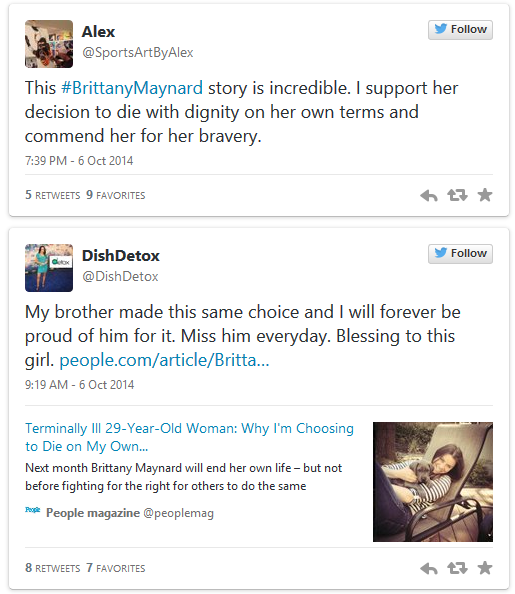 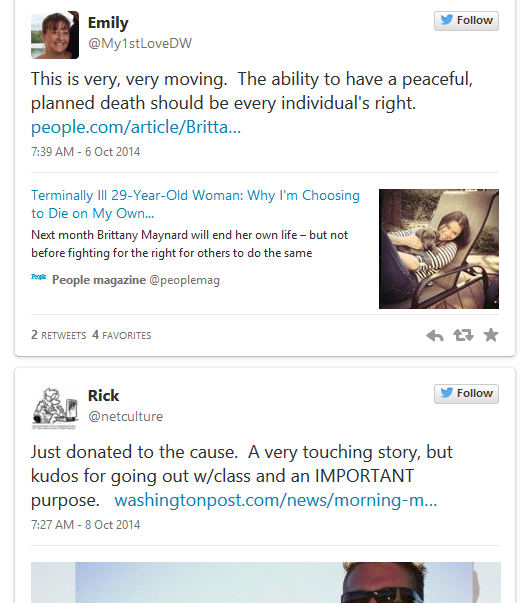 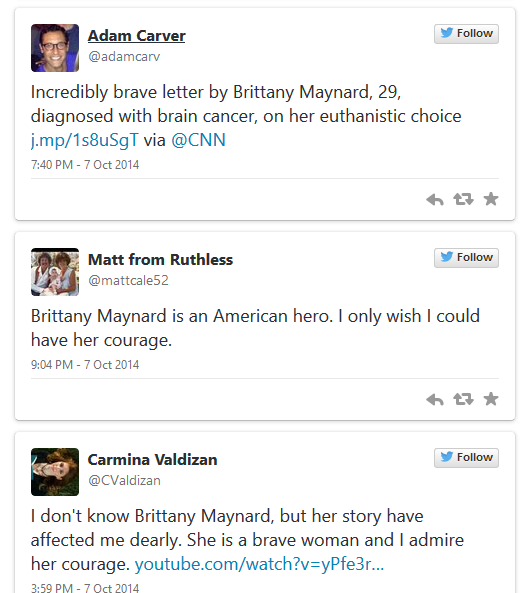 Apparently, self-murder can be encouraged only to the level of mess it will or will not leave up for the rest of us to see.The culture of death thrives on this kind of double standard. In this culture of death, for example, a baby’s life can be terminated or celebrated based entirely off of the perspective of the mother. In the case of suicide, if it appears a well-thought out process it’s to be celebrated as heroic and dignified. If it leaves a mess behind, then the perpetrator is no longer a hero, but a victim. Likewise, the answer for why depression or mental illness is any less a justifiable cause for suicide than a physical illness can’t be provided in the culture of death’s ethical wasteland.

Christians should let the world fight it out concerning where exactly that line rests between hero and victim, because both ideas are foreign to what’s presented to us in the Sacred Writ.

It is common for leftists and secularists to speak of self-murderers as  suicide “victims.” A Christian should never use that term.

There are six examples of people murdering themselves in Scripture. These include Abimilech, Saul (and his armor bearer), Ahitholopel, Zimri and Judas. With the exception of Saul’s armor bearer (of whom we know nothing about), each were known for their wickedness. Samson’s death should not be characterized as suicide, although he knew that his actions would lead to death; it is better characterized as self-sacrifice as his goal was not to kill himself, but the Philistines. The point in this should not be lost. We do a disservice both to the Scriptures and to suicide prevention when we idolize those who’ve departed through self-murder.

A Biblical view of suicide paints the perpetrator as spurning the gift of life and embracing the curse of sin – death. Although it’s commonly assumed that even Christians can commit self-murder (and indeed, I recognize the hypothetical possibility), homicide or suicide either one is hardly a demonstration of the fruits in keeping with repentance. Can the Holy Spirit inhabit a person, and yet not restrain them from the most wicked of acts? These are questions that we may not have an exhaustive answer for this side of glory, but one thing is clear; self-murder is sin, is as egregious as the murder of another being, and the perpetrator of such great sin can be called neither hero nor victim.

In suicide, the victims are those left behind and the God who gave life. The one who took life is the perpetrator. We would pray Christians would not feed into the culture of death by acknowledging or using their flawed, purposefully propagandic, definitions and terms.

Instead of embracing the “Hero or Victim” idealology of the culture of death, Christians must be heartbroken by suicide’s celebrities. We should be heartbroken each time a young woman like Brittany Maynard decides to forgo weeks, days or even minutes of the life her creator has entrusted her with – thereby spurning the common grace of God. Every time a man or woman jumps off a building in one last angry, messy, bloody tantrum in absolute disregard for the bystander or loved one who will be traumatized by their act of hatred, we must not be tempted to call them a victim.

But what’s most disturbing about assisted suicide in particular, is the claim that this is the death that is “dignified.” Please consider JD’s words on the topic.

For those who’ve watched our loved ones die valiantly, fighting incurable disease, painfully enduring each last minute, persevering through excruciating pain and the involuntary loss of bodily fluids, agonizing as their flesh gives way to death…how DARE our culture of death call assisted suicide “dying with dignity.” Being put down like a dog is not dignified. Looking that Pale Rider in the face, through tears of unquenchable pain and singing, “Death, where is your victory?! Death, where is your sting!” That, my friends, is dying with dignity.

Please don’t utilize terms and phrases used by the culture of death to perpetuate more dying. When it comes to suicide, talk like a Christian.