There is a post going around, represented by the Twitter hashtag #Braxtonslist.  Originally published at the Christian Index on Sept 4th by Brewton-Parker trustee, Bucky Kennedy, it was reposted at SBC Voices by Emir Caner a few days later. The purpose of the post is seemingly simple and straightforward; to reinforce the idea that Braxton died from cyber-bullying and to offer some suggestions on social media interaction to ensure that we don’t behave in a way that will either purposefully or inadvertently kill someone’s son or daughter.

I say seemingly straightforward because all is not as it seems. Unfortunately, several people – instead of using this time to reflect and to “mourn with those who mourn” – have chosen to fabricate a narrative and then proceed to take advantage of the relative silence created by those acting decently and respectfully in light of tragedy. In the interim, they have been very busy. Writing blog posts, sending out tweets, issuing public statements and engaging in all sorts of conspiratorial mischief.  What we’ve seen in light of this tragedy has been rank opportunism, and the stench of it is nauseating. It was Rahm Emmanuel that said “never let a serious crisis go to waste” and while this is more of a tragedy than a crisis, Bucky Kennedy, Peter Lumpkins, Craig Daliessio, the Caners and others have taken that maxim and run with it.

Here’s the most insidious part; the vast majority of their proclamations – this insistent, incessant narrative that they are spouting and sputtering – they have been using it to build defenses around Ergun Caner with the purpose of insulating him from criticism both present and future.  Think of it like man who salts his neighbors field so that the harvest cannot grow.  And so not only have they taken a defensive posture, but they have followed that up with an aggressive offense, purposefully trying to muddy the waters and silence the criticism, which is why we see so many “main personalities” involved in this travesty doing this very thing.  If one didn’t know better, you would almost be left to believe that some of these people are using the young man as a human shield to protect Ergun from future public criticism.

That’s where the so-called #BraxtonsList comes in. While it’s tempting to dismiss it as just another post in a long line of misdirection from the deceived and fellow deceivers,  either from wrath or sorrow, what makes it notable is that it was re-tweeted by various members of the Caner family – Emir, Jill and Ergun himself. This suggests that this is the narrative that they are trying to push; the cause of Braxton’s death was cyber bullying via Ergun’s critics. Let’s look at it together.

After some preamble we are hit with this line, which essentially serves to function as the thesis: “At the age of 15 Braxton took his own life. It is believed that cyber-bullying may have been the cause.”

“May have been the cause”?

This struck me as extremely odd, considering that since his son’s death, Ergun has stated multiple times during some sermons/speaking engagements that he “wished he did know why” Braxton killed himself, that there was no note, that there was no indication or signs that this was coming. In the retelling of the painful account, that particular detail from Ergun could not have been clearer. The Caner family and their allies are saying “may” only to provide some suggestion cover, disingenuously and poorly, as the rest of the article assumes and insinuates that “Yes, for sure he was bullied to death.”

But if anything was going to contribute toward the young man’s death, why make it four terse tweets from a month previous? Some have said “Well, this was the straw that broke the camel’s back.” Ok, so assuming it was, why not go after the whole bale where that straw came from? Why not send out Tweets and Facebook statues and posts and make ridiculous lists about other theoretical things could or could not have contributed toward self-murder?

“May have been the cause”?  Saying that the death “may have been caused by cyber bullying” is as wrong as saying “may have been caused by Ergun missing the opportunity to take his son’s phone call minutes before he killed himself” (as Ergun has publicly admitted). But that, indeed, would be a horrific and wrong-headed speculation. In fact, if we were playing that sinful speculation game, why couldn’t I could just as easily say “the suicide of Braxton may have been caused by the pressure and stress of his father’s refusal to repent of his continued lies even as his son begged him to come clean: death by a thousand disappointments?” Again – that would be a sinful and wrong-headed speculation, and yet this is the game that Bucky Kennedy and the Caners are playing.

Furthermore, it’s difficult to understand the purpose of naming this list “Braxton’s List.” Its not like these are things that Braxton himself always exhibited in his own social media interactions or posts or a list that he created. Rather, the idea of a legacy list is an important part of the story, and its purpose is to keep feeding the narrative whose diet at this point is essentially comprised of fake outrage and hysteria-driven self interest.

Braxton’s life was short lived but it can be long remembered if we engage in cyber-building and stop cyber-bullying. #stopcyberbullying #BraxtonsList

It’s unfortunate that the purpose of Kennedy’s article is little more than a propaganda piece to advance an agenda. And it’s ironic, because as I’m reading that list, it becomes very clear that this list is much more about Ergun than Braxton. The list reads to me as a shot across the bow. These are things that Bucky and Emir want people to do when dealing with Ergun the next time they are tempted to write about him.

Similarly, if I were so inclined, I could easily flip this article on its head. In fact, with a few small changes it could just as easily be about Ergun. For example…

1. If you can’t preach without lying… ask yourself whether you should preach at all.

3. Remember, the people you want to attack and sue have a family that feels their hurt, who you also should not try to sue.
4. People have personal problems that you may not know about. This includes fellow Christians that you sue for posting videos of you lying. Don’t push them over the edge. Stop before they drop.
5. God says, “Vengeance is Mine,” so maybe you could stop assassinating the character and suing people who have pointed out your unrepentant sin.
6. “Christians never have the right to LIE, not even once. Lying in sermons multiple times is pathological. Lying the same lies over ten years again and again and never admitting it or repenting for it is beyond the pale.

7. Preach above reproach. If there is a doubt of the truthfulness of your story, don’t tell it. Be an instrument of righteousness and not a stumbling block.
8. There are two sides to every story, and the internet is a great place when the story is caught on video and audio by dozens of witnesses, and not a single audio clip or video clip says otherwise. Then it’s probably a great place to settle the difference.
9. It’s better not to preach sermons full of lies and have to spend years removing them from the internet and suing people to recover them in order to cover your tracks.
10. Nobody wins through fabricated life stories and lies in the pulpit; lives and even souls can be lost because of it.
11. Satan is the father of lies; he doesn’t need your help.
12.  Praying for our enemies accomplishes more than having your friends, official spokesman, and brother post about them.
13. Believers are best dealt with by the local church, and yet local church autonomy should not be used to cover for sin. Doing so is as wicked as using tragedy as a distraction from your sin. 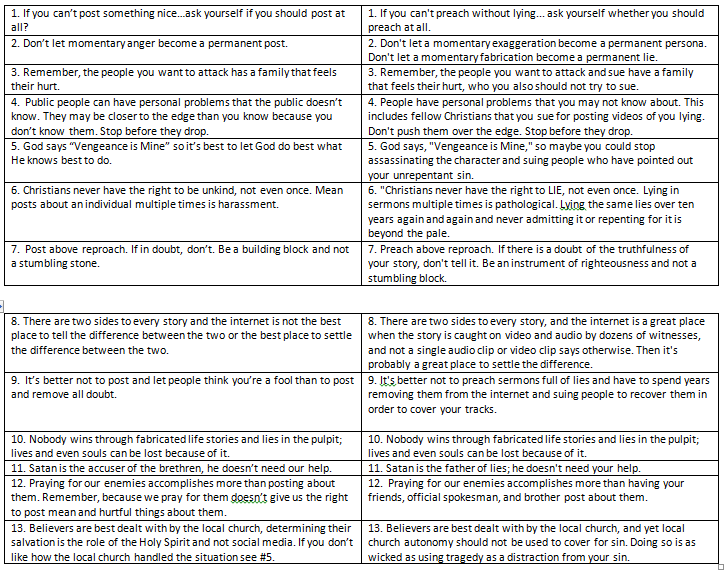 Like I said, it’s difficult not to read the first list and see these people building up their wall brick by brick, framing the argument and discussion. None of it is in good faith. Rather, because they know they can’t win or defend Ergun with the facts, they’re going for broke and angling for emotional arguments that are built upon one-sided and shameful, self-serving speculation. They’re seeking to create the equivalent of “suppressing fire” so that Ergun can continue to live in unrepentance and continue to prosper professionally without having to answer any further criticism. And this narrative began in Todd Starne’s Facebook rant he gave at the request of the Caner family, devoid of any facts, before Braxton was even buried. Ask a Church why they’re having an unrepentant liar over to speak, and they’ll be playing the Braxton card as they’ve been encouraged to do. This is unconscionable and evil, and the people who are using this boy’s memory as a shield for sin need to stop and repent.

Finally, using Bucky’s logic, isn’t it potentially damaging to infer that JD’s four brief tweets nearly a month before this tragedy caused the death of Braxton,  when even Ergun says he has “no idea” and “wished he did” of why Braxton killed himself? Is it not irresponsible to even suggest that as a possibility and put that stress and burden on JD – who is himself a “public figure” – and upon his family? Isn’t Bucky Kennedy violating Braxton’s List #1, #3 and especially #7, “Post above reproach. IF IN DOUBT, DON’T!”? Is he not violating Braxton’s List #11 in accusing Ergun’s critics of causing a suicide?  Isn’t Satan the accuser of the brethren, Bucky?

No…this narrative fabricated from the Caner camp is not helpful, and this list is not helpful. Caner’s closest associates are trying to control the narrative so they can continue doing what they’ve done since 2010, which is to defend the indefensible. Their strategy is the same, only this time, they’ve proven that there is no limit to how far they will stoop to defend Ergun Caner – even if it means using heartbreaking tragedy and a human shield to protect him from legitimate criticism.

The Quest of Beth Moore

Tom Ascol Backs Down, Will Pull All Footage of ‘Woke’ Leaders from Documentary