[In the interest of full disclosure, I never asked Ronnie Floyd out for a cup of coffee before posting this. Deal with it.] 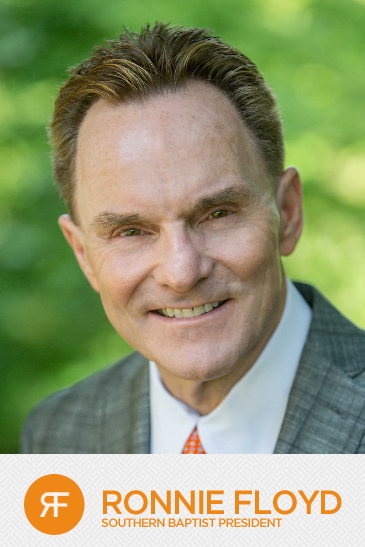 I had never really known much about Ronnie Floyd prior to hearing the news that Albert Mohler was planning on nominating Floyd for the office of president of the Southern Baptist Convention at the June 2014 meeting in Baltimore, Maryland. Oh, I might have heard the name, I suppose, but, if I had, I sure don’t remember when or in what context. But, because of the respect in which I hold Dr. Mohler, I was initially favorably disposed towards Floyd.

Then I begin to hear stories about a Disneyesque childrens’ church area, complete with a firetruck baptistry, where sirens sound and confetti cannons fire off from the rafters. I began to hear that he was a shameless self-promoter, known as “Ronnie Armani.” And I began to wonder about this nominee.

These questions and concerns about Ronnie Floyd have been out there for quite a while. 14 years ago, in the Fall edition of the Founders Journal, we read this:

Christianity Today (June 8, 2000) and other news sources have reported on what appears to be a new trend in some large evangelical churches. First Baptist Church in Springdale, Arkansas hired a well-known former Disney World designer of children’s amusement rides to design two “high tech sets” for elementary age worship areas: Toon Town for first-through third-graders, and Planet 45 for fourth- and fifth-graders. The fully animated cartoon town has 26-foot-tall buildings. The rationale behind the $270,000 project is summed up by the church’s children’s minister: “Putting a talking head in front of kids for an hour doesn’t work ….This is a visual generation. We need to use technology to the max.” That includes a special baptistry which is built around a fire engine. When a child is baptized, the sirens sound and confetti is fired out of cannons.

At the Southern Baptist Convention in Baltimore this past June, Ronnie Floyd was elected as the president of the SBC. Almost as soon as he was elected, Floyd began announcing an upcoming emphasis that he called “The Movement.” Echoing back on something that he said during a prior, but unsuccessful bid for the SBC presidency, Floyd is calling for prayer for a new “Great Awakening.” 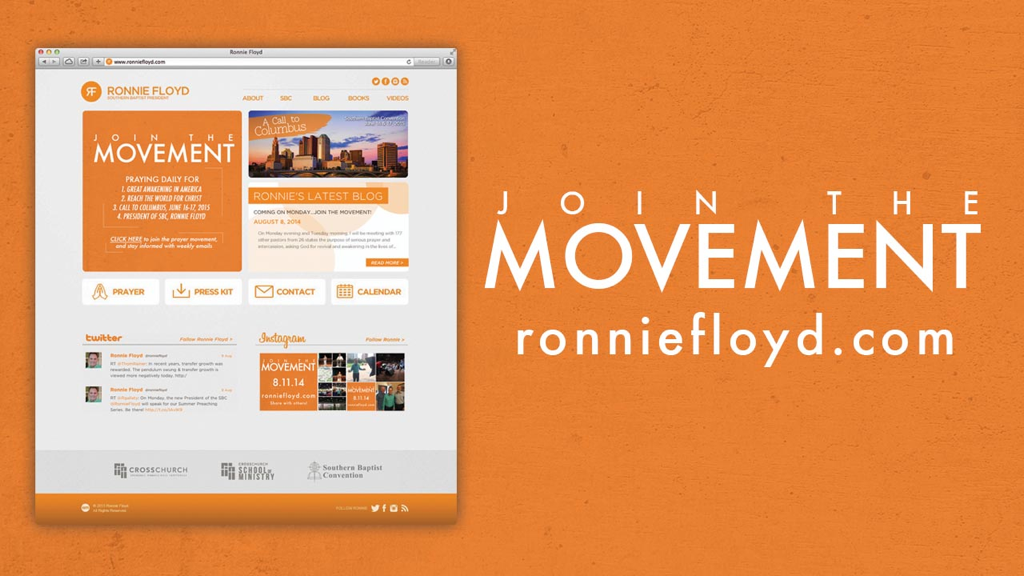 Back in 2006, the first time he was nominated for president of the SBC, Floyd said, “If elected president, I desperately want to lead us to spiritual renewal — personally, one-on-one with Jesus and corporately within churches. We’ve got to come back to a mighty, fresh touch of God. Pastors need to proclaim it as never before. If we don’t see it happen, we will find ourselves in a desperate situation. We must love God first and take the Good News around the world.” I’ve read through that statement several times, and I just don’t know what it means. It seems to me to be a load of high-sounding, but essentially meaningless, gobbledegook.

This gobbledegook has now been repackaged, now that Floyd is SBC president. On August 7th, Ronnie Floyd began to tease “The Movement” as “Coming Soon!” with this tweet:

Ostensibly, Floyd’s Movement is a call for prayer for a new Great Awakening. He asks for:

None of these are bad things to be praying for! Not at all.

But, as I said to a friend the other day, I have never seen a bigger self-promoter in the office of SBC president! Not ever! To join The Movement, you sign up at Ronnie Floyd dot com! That same friend said back to me, “Can you imagine Peter, on the day of Pentecost, telling the gathered crowds to ‘Join the Way! Sign up at ApostlePeter(dot)com!’? Or Martin Luther nailing a sign on the Wittenberg Door that said, ‘Join the Protestant Reformation! Sign up now at MartinLuther(dot)com!’?” Would these men have had websites, if such had existed, back in the day? Yes, I’m sure that they would have. But their websites would have pointed to Christ, not to themselves. Of that, I am sure.

So, what do you get if you do sign up for Ronnie Floyd’s Movement? I wanted to find out, so I followed the links and I signed myself up. What I got was an email subscription to Ronnie Floyd’s blog… 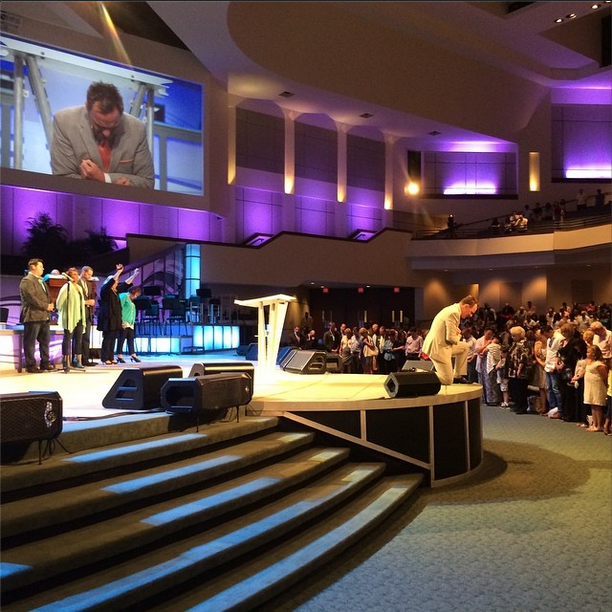 There is nothing wrong with a pastor praying. Of course not. 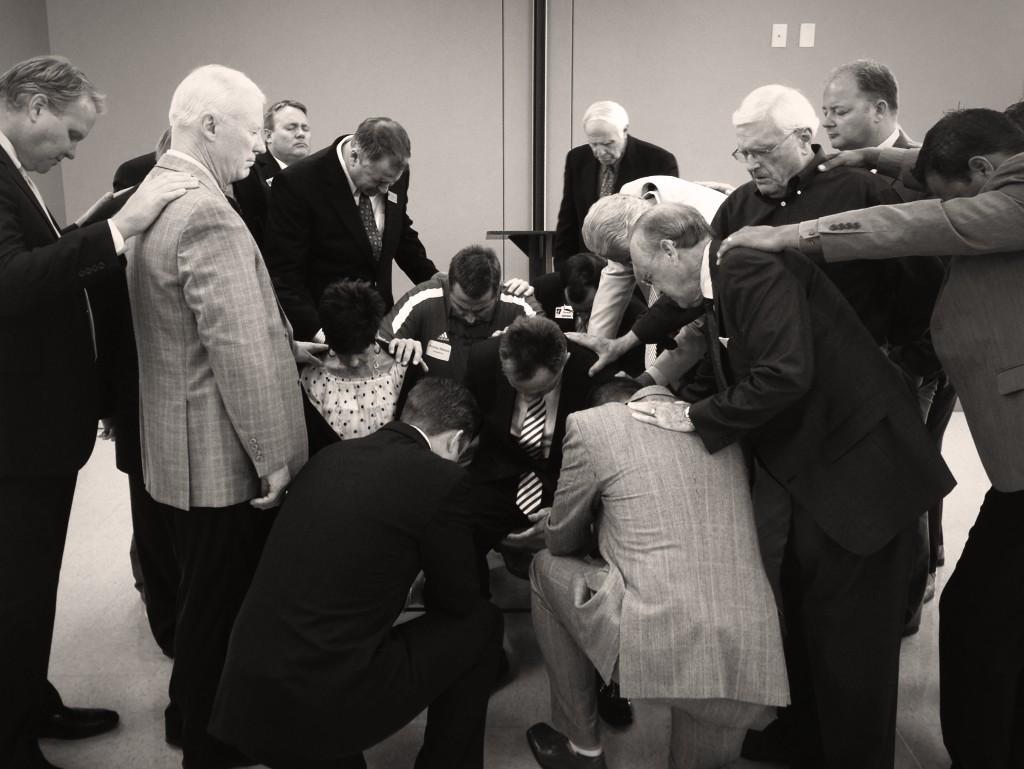 It isn’t that he’s praying. It is not that there are photographs of him praying. (Although who is running around taking pictures while everyone is praying?) No, it is that he gets these photographs and broadcasts them out on Twitter and Instagram. 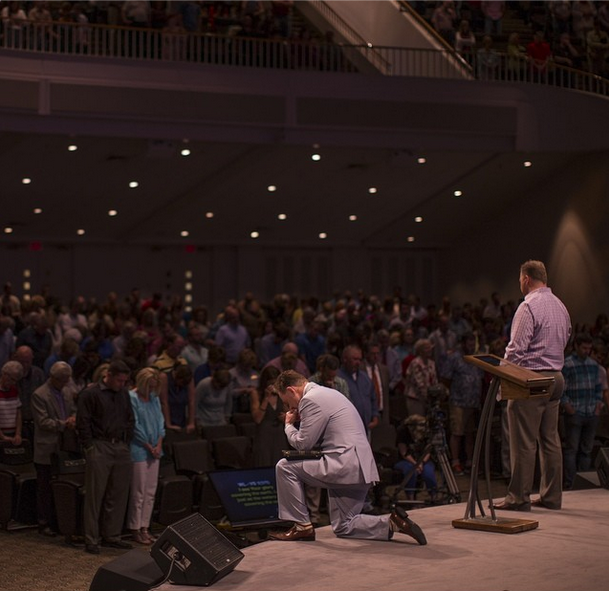 And when you pray, you must not be like the hypocrites. For they love to stand and pray in the synagogues and at the street corners, that they may be seen by others. Truly, I say to you, they have received their reward. (Matthew 6:5)

Now, I am the first to admit that I do not know Ronnie Floyd. I’ve never met him, never spoken to him on the phone, and never exchanged emails with him on any subject. Until a few months ago, I’d never even heard of the guy. But is it harsh of me to say that the guy comes across as maybe a little bit self-centered? I mean I can say this, because I’m a Baptist preacher, but a lot of Baptist preachers sure seem to come across as slick, smooth, fast-talkin’ used car salesmen. All the shameless self-promotion does nothing to moderate that stereotype.

How Hillsong and Brian Houston are Destroying Christianity