More than one million people — including First Lady, Michelle Obama  — have tweeted the hashtag #BringBackOurGirls. But whether they’re helping the roughly 250 schoolgirls kidnapped in Nigeria or hopping on some kind of first-world digital bandwagon depends, frankly, on whom you ask.

These stinging words are from a May 8 article in the Washington Post. The words are harsh, but are they true? Could most public displays of empathy for the last (no doubt, important) cause be nothing but a peer-pressure induced digital bandwagon that accomplishes little more than providing a badge of empathy for those who don it? The Washington Post’s article providing Twitter screenshots from a Nigerian-American woman characterized these displays of support for the recently-kidnapped Nigerian school girls as “a recent wave of global sentimentality” that “simplifies nothing, solves nothing.”

This recent fad, the idea that awareness equals action, is defined in the Urban Dictionary as the following:

The kind of activism undertaken when you “do something” about a problem by tweeting or posting links to Facebook, without any intent of ever actually doing something. Nothing more than a nonsense feelgood gesture so that one can say they “did something about” whatever trendy cause they’re pretending to care about. Usually only lasts a week or two before the cause is completely forgotten (i.e. it stops being cool to forward/retweet on the subject). // Use: I forwarded a video about some unspeakable atrocities in a country I didn’t know existed until I watched the video. My hashtag activism is going to accomplish something!

And frankly, nobody – and I do mean, nobody – loves hashtag slacktivism as much as Christians. For those of us who think that voting for the candidate least supportive of abortion every four years is activism and real civic involvement, posting a Facebook status or tweeting a hashtag is downright radical. But what does it accomplish? Does awareness equal action?

As you might have heard, Islamic ne’er-do-wells have wreaked havoc on the facade of religious liberty in Iraq and nowhere more brutally than in the epically violent city of Mosul (where five IMB missionaries were gunned down in 2003). Of course, keep in mind, most of the purported Christian refugees and victims of ISIS are not Christians, but Roman Catholics. Nonetheless, Mosul is home to some orthodox Christians and they are facing extreme danger and are in perilous jeopardy. So, Christians across the world are using the hashtag #WeAreN and replacing their profile photos with the Arabic letter “N”, which is reportedly used by ISIS to mark homes occupied by Christians.

Does all the self-sacrifice required to tweet a certain hashtag or change one’s profile pic really make a difference, or does it make ordinarily apathetic and, generally speaking, ignorant and uninvolved virtual tourists feel like they’ve accomplished something of value?

One reported Christian (again, the great majority of those identifying as Christian in Iraq are Roman Catholic) from Mosul told Christianity Today that it’s “encouraging to see all the people around the world supporting us.” The kind of support of which she speaks is no doubt moral support, maybe prayer support, and even though it’s intangible doesn’t mean it’s altogether worthless. But beyond the intangible, what does a tweet or profile icon from an otherwise ill-informed, disinterested slacktivist accomplish? Typically, it makes them feel like they’re not a generally ill-informed, disinterested slacktivist. 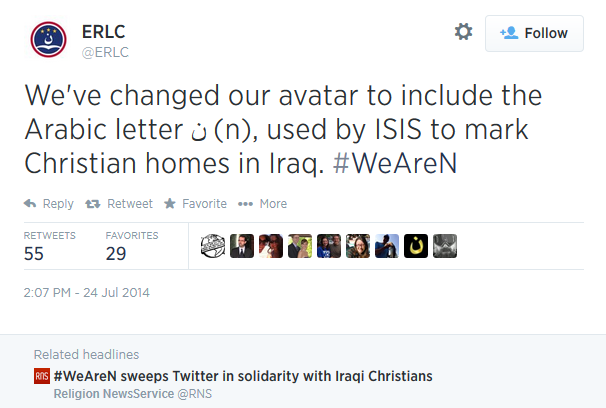 Of the multi-million dollar budget in the Southern Baptist lobbying arm, Ethics and Religious Liberty Commission, how many dollars have they now invested in lobbying State Department officials or the Obama Administration directly to ask for military intervention by the United States or our allies to end the persecution?

How much of Russell Moore’s (more than) 300k salary has he set aside to help displaced Christians from Mosul? There are sixteen million Southern Baptists. We can only find six million of them, but if all six million Southern Baptists not missing-in-action were to give twenty-five dollars a piece, we could provide the fleeing Mosul Christians 40 million dollars to help rebuild their lives and seek refuge elsewhere. Of the estimated 3000 Roman Catholics and Christians in Mosul (the number is probably far smaller), that would add up to over 13k per person and upwards of 50k-60k per household. Wow. That would be something at least.

But what does the ERLC plan on doing? Well, they’ve changed their logo.

Maybe it’s not about jumping on the latest digital bandwagon, as the Washington Post calls it. Maybe it’s about sincere people seeking to make an actual difference and are looking for ways to financially donate, prayerfully give, or sacrificially serve. Or, maybe it’s about doing the closest thing possible to nothing that makes you feel like you’ve done something.

Long after the ERLC has changed it’s logo back, or maybe adopted a new one in defense of Duck Dynasty or some new cause that plays well for publicity, there will be persecuted orthodox Christians in Iraq. Long after people have tired of getting Facebook updates on ISIS and Mosul, evangelical Christians will still be in the prisons of China, where some of them have been for decades. Long after we’ve replaced our #WeAreN with #IStandWithHobbyLobby in the next Supreme Court fight, groups like Voice of the Martyrs will still be doing the same thing they’ve done all along.

Hopefully, all the folks engaging in social media slacktivism will begin to contribute something tangible to the cause of persecuted Christians around the world. It probably depends on how many Facebook likes they’ll get.

Using the Bible to Argue for Abortion Rights