The Pen
May 31, 2014 News Division Brewton-Parker, Defender, Enabler, Ergun Caner, Honesty, Liar, Muslim, Tim Rogers
Tim Rogers, the pastor of Ebenezer Baptist Church in Indian Trail, North Carolina, has long been one of the most vocal defenders of Dr. Ergun Caner and his decade-long spree of deception.  Yesterday, he posted an article decrying a proposed resolution to be presented for adoption by the Southern Baptist Convention at their annual meeting in Baltimore, Maryland June 10th and 11th. The resolution is question, submitted by Tom Buck, pastor of First Baptist Church of Lindale, Texas (and a contributor to the Pulpit & Pen blog), states:

WHEREAS, Christians should not dare take a grievance against a brother to secular courts (1 Corinthians 6:1); and

WHEREAS, Taking a matter between brothers to the secular courts is to the shame of the church (1 Corinthians 6:5); and

WHEREAS, It is better to suffer wrong than to take a believer to the secular courts (1 Corinthians 6:7); now, therefore, be it

RESOLVED, That the messengers to the Southern Baptist Convention meeting in Baltimore, Maryland, June 10-11, 2014, condemn the initiation of a lawsuit against fellow Christians; and be it further

RESOLVED, That initiating a lawsuit against a Christian is sinful and must be repented of.

This seems to be a straightforward call to Christians to obey the clear biblical mandate not to file suit against other Christians, yet Tim Rogers says that this resolution is just another attack on Ergun Caner by those dratted Calvinists. Rogers writes, “It is about the devious plan of many Calvinists to do what they can to silence one of the most formidable, vocal critics of strict Calvinism among Southern Baptists–Dr. Ergun Caner.” This is a laughable conclusion to an article full of factual inaccuracies, distortions of history, and unreasonable inference of motives.

There is no doubt that Ergun Caner’s lawsuit against Jason Smathers and Jonathan Autry was forefront in Tom Buck’s mind when he compose the resolution – he has said as much. But, as he is also stated, the resolution is worded generically against all lawsuits of Christian against Christian because the apostle Paul’s words in 1 Corinthians are generic against all lawsuits of Christian against Christian. I have no doubt that the apostle Paul also had specific cases in mind when he penned 1 Corinthians. However, the fact that specific examples can be named does not detract from the biblical injunction against Christians suing Christian in open court. And I find it telling that Tim Rogers never ever attempts to deal with nor even reference the passages in 1 Corinthians 6 that are the basis for the resolution.

Instead, what Rogers does is focus his attention and his criticism on the personalities that have been at the forefront of exposing Dr. Caner’s lies and deceit, two of whom were the men at which Dr. Caner’s lawsuit was against. And, in doing so, Rogers edits history to fit his biases and match his preconceived ideas.

For example, Rogers totally distorts the basis of Ergun Caner’s lawsuits against Autry and Smathers, implies that the lawsuits had actual merit, and seems ignorant of fact that the lawsuits were dismissed with prejudice and were deemed to be baseless and frivolous.

Rogers also gets his facts about the 2006 debate that never happened, a debate that was supposed to be between Dr. James White and Dr. Tom Ascol, on the one hand, and Dr. Ergun Caner and Dr. Emir Caner on the other. Rogers writes, “James White found out that he would not be able to edit the recordings to sale for his profit and backed out of the debate.” This could not be further from the truth. As is amply demonstrated by the copious email correspondence between doctors White and Ascol and the doctors Caner. I will not recount all the details here, but you are free to wade through the pages and pages and pages of emails, they are all posted at Dr. White’s website, and if you do then it will quickly become apparent that it was not the actions of Dr. White or Dr. Ascol that derailed the debate. Nor was it some dispute about the audio or video of the debate. What caused Dr. White and Dr. Aschol to withdraw from the debate was the Caner’s unwillingness to stand by the agreed-upon format by insisting on last minute and unfair rules changes. And, as I said, this is all documented in the correspondence.

These are not the only factual errors in Rogers’ post, and his tendency to play fast and loose with facts continued in the comment section. Consider this exchange that I had with him:

Tim-to the best of my knowledge, Jonathan Autry has not filed suit against Ergun Caner. He has, at the direction of the court, ask the court to award his expenses that resulted from Dr. Caner’s failed suit of Autry.

Gene- being the Babylonian Squirrel, your comment clearly shows those nuts you have been eating has gone to your brain. The court cannot dictate to a person they are to file a lawsuit. Jonathan Autry has clearly filed a lawsuit against Dr. Caner. His, is the same lawsuit, that of a civil suit. Dr. Caner filed a lawsuit that should have been a criminal charge and that is one of stealing the property of someone else. Had his lawsuit been awarded both Smathers and Autry would have been on the handle for criminal activity. But that is the nature of copyright. It has to go through the civil process first and then the criminal charges would come. The suit was dismissed. Autry is filing a civil suit to get money.

I tried to respond, but, as of the time of this writing (midday Friday, May 30), my comment, reproduced below, was still “in moderation.”

The documents that I have seen asking for the court to award Autry’s legal expenses contain, in their header, the exact same docket number (6:14-cv-000046:14-cv-00004 (Caner v. Autry)) as Caner’s suit of Autry, which means that these motions are not a seperate lawsuite, but motions filed in the same legal proceedings that were instigated by Caner. These documents are available online from the court —https://ia600607.us.archive.org/17/items/gov.uscourts.vawd.92537/gov.uscourts.vawd.92537.docket.html

While my interactions with Tim Rogers have been few, this is not the first time he has demonstrated his complete and utter inability to do actual research into anything. Consider this exchange that he and I had back in 2010 in the comments of Wade Burleson’s blog: 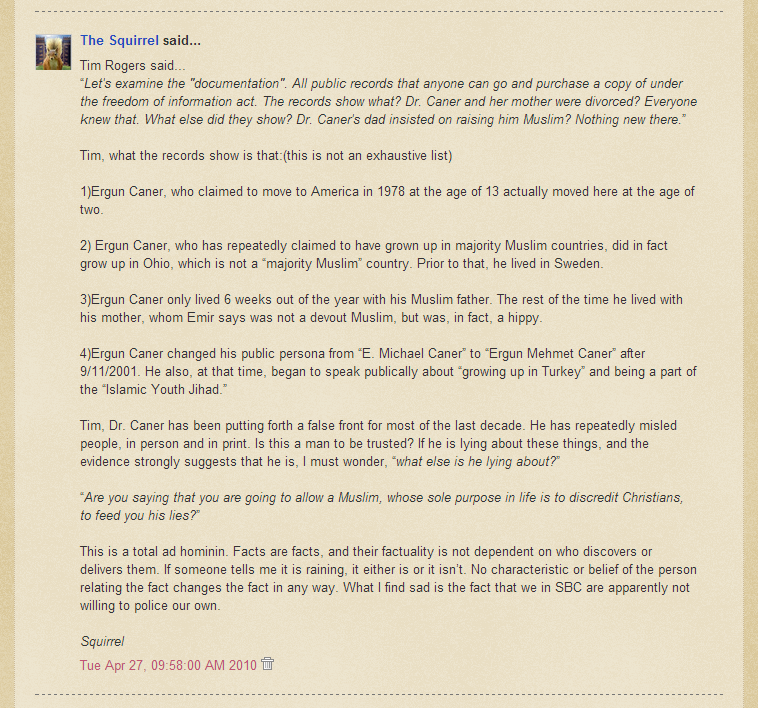 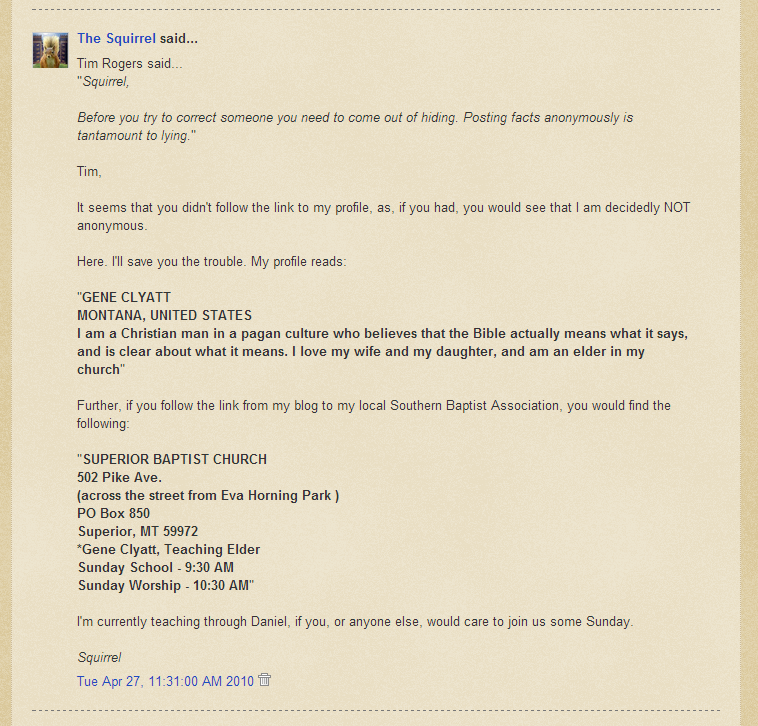 I think that it is fairly obvious that Tim Rogers has a pattern of just not doing his homework.

And, as I get ready to send this post off, I notice that Rogers has posted an update at his blog:

UPDATE: I have been busier at my blog in the last 24 hours than I have in the last 6 months.  Many comments have been lodged and many are still in moderation due to ungodly, harsh criticism and various other ungodly innuendo.  However, I can assure the reader that the ones still in moderation carry the same theme as the ones you will see me, and my friend Peter Lumpkins defending.  It is about Dr. Ergun Caner.  This resolution is about Dr. Ergun Caner and the vast majority of comments we have received are from Calvinists desiring to see the demise of Dr. Ergun Caner.  There is even a comment that justifies someone suing Dr. Caner because, as they say, “he is an unbeliever”.

I agree my article is hard hitting and names names.  But it is time to stand up and say, enough is enough.  If the Calvinist Calvinistas are not going to reign in their troops then it is time to stand up.  Just ask people who have re-tweeted something affirming about Dr. Caner how they have been treated?  Ask a war hero who lost his legs in Vietnam how he has been treated? This resolution is about nothing but to “get Ergun” and is being placed before the SBC by the very church Pastor that had a conference to put down a Brother in Christ.

Just a couple of quick points in rebutal:

Gold Dust, Feathers & Feelings: The SBC To Be?

Is Tchividjian a Smidgen Antinomian?