On March 27, Southwestern Theological Seminary President, Paige Patterson, engaged in an online Q&A session on Twitter, with the hashtag #askdrp. Patterson was the first national figure to promote Ergun Caner and propel him to prominence on the Southern Baptist stage. As Georgia Baptist Christian Index and other outlets have reported, “Patterson has been instrumental in both the lives of [Emir Caner] and his brother, Ergun.” Indeed, he has. Patterson has been the single greatest proponent of Ergun Caner in Southern Baptist life and it’s safe to say that should Patterson not have pushed Caner upon us, the vast majority of us would have never heard of Ergun Caner.

Taking advantage of the rare occasion for interaction between Patterson and the public, I asked a question concerning Caner, to which he graciously (not really) responded.

Note, I didn’t ask whether or not Patterson had privately called Caner to repentance. Yet, he chose to answer “what I do with anyone privately is not your business.” David Hankins might argue that being caught in bed “with a dead girl or a live boy” would be our business, but in all actuality I didn’t ask about their private interaction. Specifically, I asked Patterson if he would publicly call Caner to repentance considering he was the very one to publicly promote Caner to stardom. The first part of Patterson’s response is oblivious obfuscation (if not a falsehood) and the second part is irrelevant.

Patterson, perhaps inadvertently, backed up his dump truck to our Southern Baptist lawn and dumped a load of garbage. Like with another of his protege’s, Darrell Gilyard, we just want Patterson to come pick up the trash he left us and take it back with him. But, I digress…

The real #DOWNGRADE issue isn’t Patterson’s continued refusal to discuss his support for Ergun Caner, but an unbelievable comment during this Q&A that left many Southern Baptists staring at the computer screen with gaping jaws, stunned at his response to one question in particular.

When asked, “Who is your favorite contemporary theologian” Patterson responded, “Hard question to answer. I love the works of Peter Kreeft because he teaches you to do Socratic reasoning.”

Some Southwestern students, on almost instantaneous damage-control mode, were quick to point out that Patterson said he loves the works of Kreeft merely for his Socratic reasoning, and not for his theology per se. And yet, it would be odd indeed to be asked your favorite theologian and to give an answer not respective of their theology. Would it not?

That Patterson would name Peter Kreeft when asked his favorite theologian is beyond bizarre. It is #DOWNGRADE beyond comparison. In case you were unware, Kreeft is professor of philosophy at Boston College and at King’s College. Author of 67 books, Kreeft is among the most notable Roman Catholic converts from evangelicalism.

This is a clip of Kreeft denying that hell is a place of eternal consciousness, advocating anihilationsm.

This is a clip of Kreeft explaining his conversion to Catholicism.

Notice, Kreeft alleges it was Jesus Christ who founded the Catholic church around the 14 minute mark.

Notice, Kreeft defends the belief in transubstantiation at 16.05.

Notice, Kreeft’s support for the Evangelicals and Catholics Together document at 34.10. As ecumenical as the ECT document may be, I’d have to ask, “Why not? The president of the Southwestern Baptist Theological Seminary loves the work of Peter Kreeft.”

Notice, Kreeft wants a “reunification of the [Protestant and Catholic] church, without compromise” and says that’s “as important as the social Gospel” at 38.10.

Notice, Kreeft says, “the most important division between [Catholics and Protestants] has been solved without compromise” at 39.12, speaking of the Decree of Justification, signed on between the Lutheran World Federation and the Catholic Church. Remember, this is what was Bishop Palmer discussed when the Pope recently made remarks to a worship service hosted by Kenneth Copeland.

Notice, Kreeft says, “…most of us will only get to Heaven through purgatory” at 43:30.

Notice, Kreeft says the whole Protestant-Catholic divide was just an “oops” misunderstanding at 43:50.

Now, lets assume that Patterson’s love for Peter Kreeft is solely because “he teaches us to do Socratic reasoning.” Kreeft’s Socratic reasoning has led him to accept the doctrinal heresy of the Roman Catholic Church lock, stock and barrel. It doesn’t seem to me that this is commendable.

But let’s consider Kreeft’s highly-acclaimed book, Ecumenical Jihad: Ecumenism and the Culture War, and ask ourselves what Patterson could possibly find commendable enough to give Kreeft’s name when asked his “favorite contemporary theologian.”

In 1997, John MacArthur discusses this book with radio host Al Saunders on Grace to You. Here’s what MacArthur had to say about the ecumenism promoted by Kreeft:

These people who… not only the gentleman who wrote the book, but the people who endorsed the book, leading evangelicals whose endorsements are on the back of the book, these leading evangelicals who endorsed the book for whatever reason they endorse it, are seriously muddying the clarity of the gospel because if this man is a Christian, by their definition, then you can become a Christian some other way than the way the Bible says. If you can…if you can be someone who says that Muslims, and Buddhists, and everybody else is going to be in heaven, then you don’t understand the gospel.

MacArthur continues (and notice, his sentiments toward Kreeft is slightly different than Patterson):

Well you would think…you would think. I mean, what if he is right. The proper endorsement of this book should say, “This is damnable heresy right out of the pit, leading us toward the one-world religion of the Antichrist and the false prophet, this is falling into Satan’s clutches and we ought to be aware of these kinds of trends so that we can fight against them with all of our might.” Instead of saying what that says, “What if he is right?” written by a very prominent reformed theologian, that’s just mind-boggling to me. And whatever supposed intellectual stimulation this book might generate, it will do damning harm because what it does is plant the seed, or even make a convincing argument for the fact that we don’t need to evangelize all these people because they’re all going to be there anyway.

One could scarcely imagine MacArthur naming Kreeft as his “favorite contemporary theologian.”

I am amazed…I am amazed at this. And I think sometimes these guys who know better who identify with this kind of Movement, do it because maybe they get a little swept away and enamored with the sort of high-brow heady environment of these sort of elevated intellects. Maybe they like the idea of being accepted in wide, wide circles and they don’t really want to create conflict. But the bottom line is, this is a deadly, deadly heresy that is being endorsed by Roman Catholic leaders and well-known evangelical leaders as if it were something Christians ought to pay attention to and, in fact, it is a frightening, frightening thing that can recast lost people as people who are going to end up in heaven.

And yet, naming Kreeft when asked his “favorite contemporary theologian” is precisely what Patterson did – and without apology. And when Mark Lamprecht of Here I Blog attempted to point out to Patterson the ecumenism and Universalist views of Peter Kreeft (I think out of a desire for clarification more than anything)… 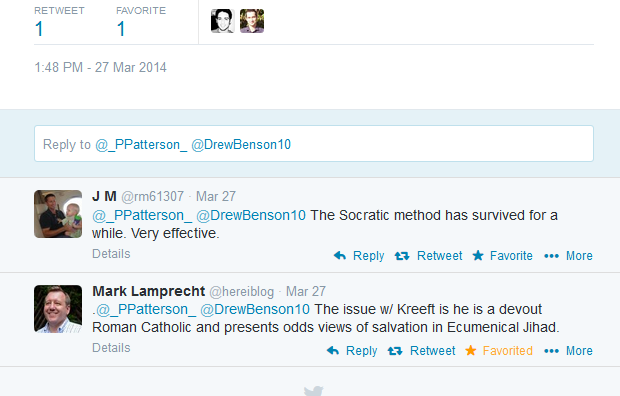 …how does Patterson respond? He doesn’t, of course. Why would he? He doesn’t owe any clarification to typical, run-of-the-mill Southern Baptists. He runs a Southern Baptist seminary and insinuates – quite clearly – that a Roman Catholic ecumenist and Universalist is his favorite theologian.

What business is it of yours? Nothing to see here, citizen. Move along.

I can’t help but think that what Patterson admires about this Roman Catholic is that he’s a convert from Calvinism and remains an outspoken critic of Calvinism. Never mind that Kreeft has left Christianity for Roman Catholicism and never mind that he left Particular Redemption for outright Universalism. At least he’s not a Calvinist anymore, right? If you can find anything endearing about Kreeft’s ecumenical, Universalist theology to Paige Patterson besides his disdain for the Doctrines of Grace, please let me know.

Mother’s Day and Church: Beth Moore Doesn’t Get It