Proponents of the charismatic movement necessarily defend various parts of the charismatic and Pentecostal experience. These are acts and practices that are generally unique to them and manifest in a variety of ways.They will defend holy laughter, being “drunk in the Spirit”, uncontrolled moving and shaking of their bodies and extremities, ferocious weeping, being slain in the Spirit, and their version of speaking in tongues. These are generally considered to be the acceptable manifestations of the Spirit, and most are common in the typical Charismatic/Pentecostal church today. A common explanation for them is that these sorts of things happen when the Holy Spirit overtakes one’s body- that they are so full of Him that it burbles up in godly and wonderful ways.

Cessasionists tend to eye these acts with suspicion. They view most of it as weird and creepy and either the result of the practitioners own fleshly passions, or some demoniac at work in the hearts of these people.  They like to point out that these practices are not found in the scriptures and that there is no real precedent for what is being done. In kind, continuationists will point out that it’s unfair to make an argument from silence and nowhere do the scriptures prohibit these things, that even though to some people it may look like disorderly chaos, in fact these things accompany revival where the Spirit is moving and where God’s word is being proclaimed. One man’s “random woman rolling back and forth on the carpet while alternately weeping and shrieking” is another person’s “dear saint overcome with the glory of God’s presence while the Holy Spirit is ministering to her with groanings that cannot be uttered”.

These practices – holy laughing, slain in spirit, shouting and arm flailing – these are more benign and common practices and will be vigorously defended by the Charismatic and Pentecostal movement. It seems that most charismatics have a stomach for this sort of thing, but as soon as the phenomena of “barking like dogs in the Holy Spirit” is introduced, the rebukes from continuationists come out and agreement appears like magic. Charismatics will join in and label this practice as excess and worldly and virtually unheard of. They’ve certainly never seen it and wouldn’t put up with it if they saw it happening. This action crosses a line you see, and the people manifesting the Holy Spirit in this way have gone too far. Suddenly the Holy Spirit at work has become Beelzebub, and it ought to be stopped, rebuked and repudiated.

Dr Michael Brown certainly thinks it’s weird and excessive. He has made public statements about it on several occasions 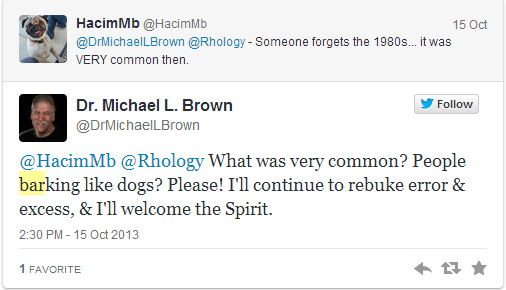 In his final appeal to John MacArthur and the Strange Fire conference he twice calls the act of barking like a dog in the Spirit “bizarre” and recently in an interview with Jordan Cooper, at the 27 minute mark, we see this exchange which reinforces his abject distaste for this practice and calls it idiotic and bizarre [Note, edited for brevity and relevance. Plus the sound quality was bad and faded in and out several times. See the original for the whole snippet.].

Jordan Cooper: “There are some pretty weird things….you see people being led around on dog leashes and howling like wolves and things like that. How do you approach those kinds of things that you see in a charismatic revival. Do you reject those things, or do you not really say anything because you don’t know if its the Spirit or not. How do you approach that?”

Dr. Micheal Brown: “Well it’s outrageous idiocy…outrageous idiocy. I’ve never seen anything like it in my life. I’ve never….I’ve never personally been in a meeting like that….its completely unrepresentative of 99.99999% of Charismatics and Pentecostals worldwide. I heard about it once in 1995 and wrote a poem mocking it [unintelligible]…. It wouldn’t be tolerated for a split second in Brownsville [revival]. Now I’ve seen thousands of people prayed for and overcome by the Spirit. People fall on their face when prayed for, people fall on their back….I’ve no problem with people being so overcome with joy that they jump and [unintelligible] run around in foolish celebration if it’s appropriate in a service like that, or people so overcome with joy that they burst out laughing…however, that being said, the idea of people barking like dogs or being lead around on a leash…these are outrageous….these are bizarre.”

Here is the question I have though: why is Dr Brown and other Charismatics in his camp quenching the Holy Spirit? More precisely, on what basis can they say that getting on all fours and running up and down the aisles while barking like a dog in the Spirit is worldly, sinful, and excess? Or how about just barking like a dog as a whole? Through what scriptural and biblical filter could they pass this through and determine that it’s outrageous and idiotic? My contention is not that charismatic leaders aren’t addressing the abuses. I am wondering on what objective basis can they call it an “abuse” in the first place?

Could not a charismatic practitioner who is prone to howling during the melee say something like, “When the Holy Spirit comes upon me, I lose control of my extremities and I fall to the floor. I start off laughing and groaning, but then slowly, as the Spirit grows more heavy on my heart, the groans become more throaty and husky in nature, and soon I find myself howling and barking.” ? It’s all just a matter of degrees, from one manifestation to another, and how do we know when one degree is too many?  We’ve already established that the person who accepts all the other manifestations cannot point to the Bible and point out there is no precedent for barking, as that would betray the apologetic for the former. They can’t fairly look at it and say it’s excessive and worldly, as there is no objective standard to compare it to, and because of its purely subjective nature, there cannot ever be one.

According to their playbook, as long as it doesn’t violate the scriptures and as long as people all around are making similar sounds and groans, and the Spirit is seemingly manipulating their bodies in various other similar contortions and configurations…then what right does Michael Brown have to quench and blaspheme the work of the Holy Spirit by denying the work It is doing and the right to manifest itself in the barking of a dog? What basis does he have? What right does he have to insult and castigate the dog barkers and bring reproach to their manifestations? There is none. A continuationist calling “dog barking in the Spirit” foolish, erroneous, and excessive is quenching the Spirit by all the standards and measures they’ve instituted for their other charismatic practices, and such close-minded rejection of the mysteries of God needs to be rebuked and corrected.

Are the ERLC and TGC Merging into One?

Kendall Jenner Needs a Father, not a Youth Group…and Your Kids Do, Too

Was the Apostle Bartholomew even Martyred? Myths that’ll Preach

As we have repeatedly chronicled, Big Tech is censoring any and almost all conservative voices (as you are aware). However,