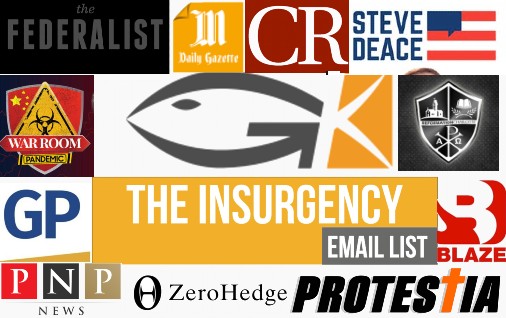 [Gideon Knox Group] Over the last 72 hours, America has experienced an all-out attack from Big Tech upon our citizenry. In a coordinated assault that makes online censorship efforts of Red China and North Korea look tame by comparison, the Technocracy has silenced not only the sitting president of the United States, but millions of ‘ordinary’ Americans. The infamous ‘purge’ that crescendoed on January 8, 2020, silenced the voices of half of America.

In unanimous lock-step, Big Tech companies such as Amazon, Google, Apple, YouTube, Vimeo, Facebook, Twitter, Pinterest, Reddit, Shopify, Paypal, and more blocked access of President Donald J. Trump to Americans and – just as nefariously – blocked or banned the speech of millions of his supporters. In addition, corporate America has largely supported these efforts, including Barclay and other banking conglomerates, health care insurers like Blue Cross and Blue Shield, and major Fortune 500 companies have financed the purge and extended its policies not only regarding Trump, but of the 70 million or more Americans who voted for him in the 2020 presidential election and who continue to support him.

A new day has dawned in America. It is not precisely as prophesied by Orwell in his classic 1984 or by Huxley in Brave, New World. In these dystopian novels chronicling the censorship allegorizing Marxist regimes, the government censors the media. But in our dystopian present, the media is censoring our rightfully elected government (whether or not you agree with the election results, Donald Trump remains president under American law until the inauguration of Joe Biden).

The fact is, the censorship of dissenting opinion in 2021 America is even more pervasive and complex than anything imaged by the dystopian authors of the mid-twentieth century. From social media to the traitorous “journalists” who provide “fact-checks” for our technocratic overlords, they have managed to kick dissenters off social media, silence us in mainstream media, persecute alternative media, and shut off our ability to communicate.

Consider this: the current technocratic and statist regime believes that the biggest problem in 2021 America is the ability of people to effectively communicate, and are doing everything possible to stop the free-flow of information between citizens.

Not only does this tyranny prevent well-meaning humans from positively interacting in the Marketplace of Ideas, but it weaponizes fear and manipulation. When people “do not know what to believe” they will look with great suspicion upon all forms of media, discount all valid reports, and will be more likely to fall for misinformation posited in the forms of unsubstantiated and dangerous rumor.

America is at war, whether she knows it or not. Conservatives have been targeted for elimination and the Antifa-inspired raid upon America’s capital is part of a coordinated effort to label all forms of dissent as terrorism and a newer, bigger, and more egregious Patriot Act II will be soon passed that outlaws any speech the current regime considers dangeorus.

Effectively, the First Amendment has been revoked in the United States and all citizens should join an information insurgency against those who occupy the U.S. Congress, Silicon Valley, and Wall Street.

The Gideon Knox Group is a publisher for alternative conservative and Christian news, with websites like Protestia, Pulpit & Pen, Montana Daily Gazette, and more. But unlike many sites recently targeted by the technocrats, we have faced censorship by Google, Amazon, YouTube, Vimeo, and other Big Tech companies for years (and have chronicled it daily on our websites). However, this development has allowed Gideon Knox Group to invest early in private servers and additional streams of media to withstand the assault.

Although censorship has cost our organization hundreds of thousands of dollars per year, we are not primarily motivated by a particular business model that focuses on profit. We are ideologues, believers, and activists who believe in a cause bigger than ourselves, in a God who does not lose wars, and in preaching truth until the very end.

In short, we are ready to go to the gallows, which are now being prepared. But rest assured, our ambition is to engage in an informational insurgency that will get you the information you need to carry on the fight.

Gideon Knox Group has launched The Insurgency, a robust email list using the email addresses of tens of thousands of people already subscribed to our various websites and available for you to subscribe to here.Join my email list

Every single day, a list of news articles will be sent that have been carefully curated from alternative news sites and fellow insurgents like those of the Gideon Knox Group, but also including The Gateway Pundit, The Federalist, Zero Hedge, The Blaze, Sovereign Nations, Todd Starnes, Capstone Report, Reformation Charlotte, and hundreds of other lesser-known sites and information from podcasts like Steve Bannon’s War Room, Steve Deace, and more. We will also alert you when fellow insurgents somehow manage to make it through the Big Tech blockade to post truth on social media (before it is soon deleted).

Gideon Knox Group is prepared to play ‘whack-a-mole’ with Big Tech and circumnavigate whatever censorship will soon be applied to our email accounts and have made contingency plans for that inevitability to ensure you continue to get the news they don’t want you to have.

We aim to be your last lifeline to the truth during the dark days ahead in America’s future, and we are in this together.

[Editor’s Note: Gideon Knox Group is a Montana-based publishing group, as well as the publisher for Protestia and other leading alternative news sites]